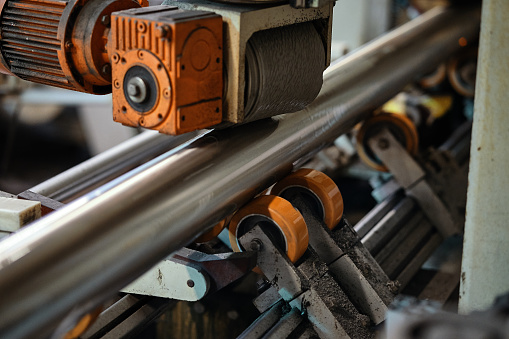 In our early school days, we all studied friction which is rubbing two surfaces to produce heat. Likewise, in simple words, friction welding uses the same rubbing force to join two pieces of metal and thermoplastic.

Friction welding is a solid-state welding process that welds workpieces using rotation and friction to produce heat. In this welding process, metal forges together by applying the machine’s kinetic energy deposited in a rotating system. No external heat is used to fuse the metal. Instead, the heat is formed by the submission of external pressure.

Let’s dig deep into the details of the process, types, and advantages of friction welding.

Unlike the traditional fusion welding process, The FW is a solid-state welding process that practices external heat generation principles. The two surfaces to be welded are rubbed rigorously together to produce heat. The friction between rotating and non-rotating surfaces creates sufficient heat at the weld edge. After the required temperature is generated, external pressure is applied until the two pieces of metal permanently joint.

The moving parts produce heat resulting in plastic extrusion forging the mating components. In general, this type of welding usually results in the breaking or crushing of reinforcing particles at the interface between components in movement or the tool and component interface. The heat-affected zone is typically softened, which leads to a decrease in hardness.

The welding process based on friction to weld similar and dissimilar material is considered friction welding. However, the following types of FW are widely used in various industries to fabricate high-quality products.

In the RFW process, one workpiece rotates at high speed over the other under a compressive axial force that produces heat, causing the two materials to join. The compressive force shifts the plasticized material from the interface, ousting the original surface oxide layer and other contaminants and endorsing metallurgic surface interlocking joining mechanisms.

What makes FSW different is that instead of relying on a consumable tool to join two workpieces together, it uses a non-consumable one that’s rotated and then plunged into the interface between the two pieces. From there, the tool is moved through the interface resulting in frictional heat that causes the material to soften and mix together, eventually creating a solid-state bond.

In the LFW process, one workpiece oscillates with the other under a tremendous compressive force to produce friction. Thus, the resultant friction produces heat causing the two materials to form a strong bond.

This process is used to join metals as well as plastics and wood. In addition to this, it is also used for combining dissimilar materials as well.

Inertia is a mechanism for delivering energy to the weld interface in rotary friction welding. It is a type of rotary friction welding since it produces heat through rotation. In this process, the rotation part is connected to the flywheel. Once the desired rotation is accomplished, the wheel steadily reduces, and finally, the drive motor is disconnected to stop the process.

Is Inertia welding an alternative to friction welding? 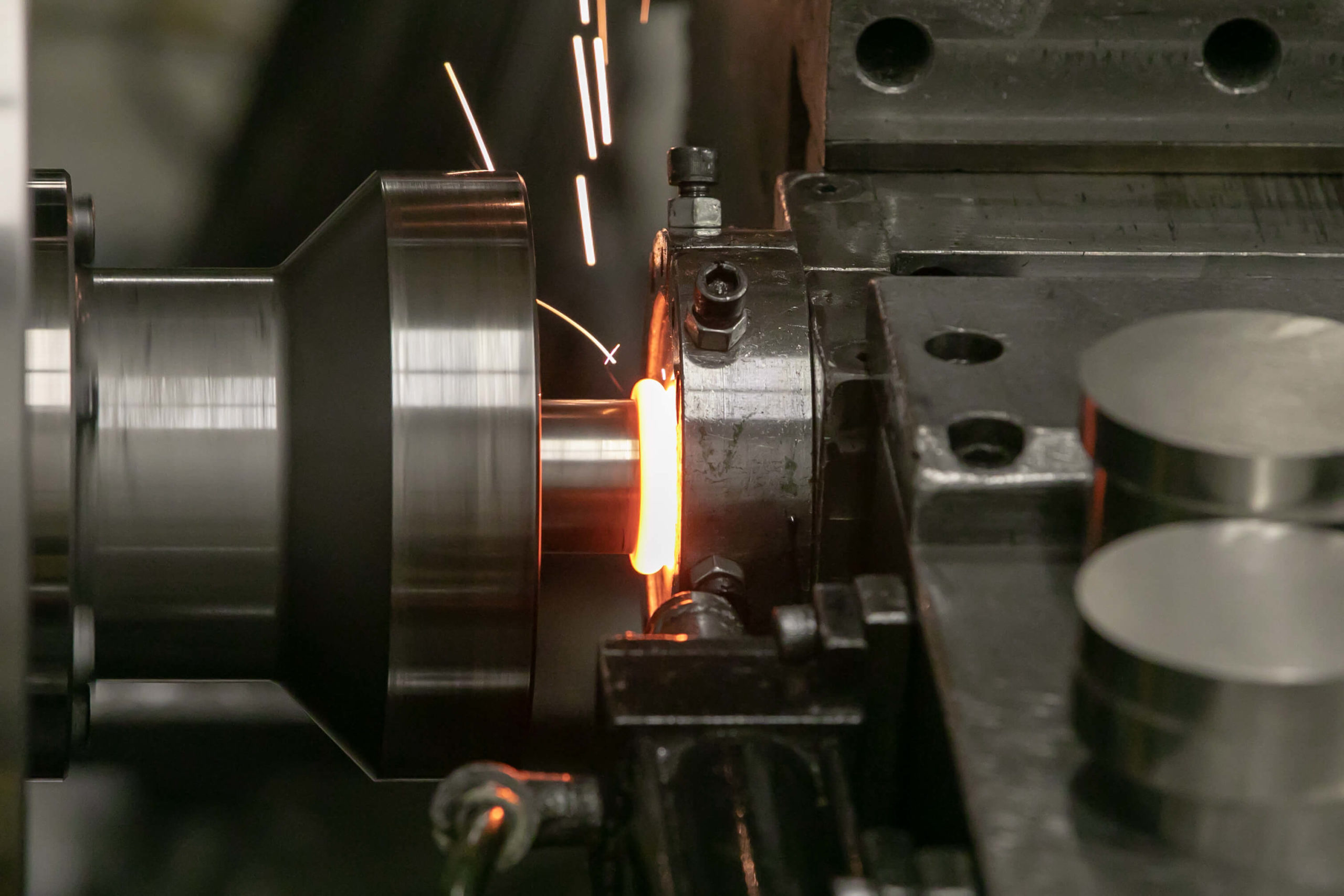 Sometimes people refer to inertia as friction welding, which is not entirely wrong. It is a part or type of friction welding. It is much like standard rotary welding that uses kinetic energy stored in a heavy wheels system called a flywheel. This makes it ideal for joining metals that are difficult to weld using traditional methods.

Let’s look at the steps involved in this procedure to understand inertia friction welding better. 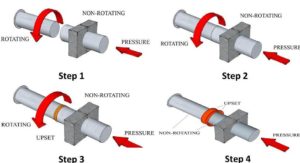 A workpiece is set in a static holding device, while the other clamps in a spindle chuck. Now the flywheel begins to accelerate rapidly up to the pre-calculated speed and store kinetic energy.

Once the wheel fulfills the needed speed and energy, the spindle chuck gradually stops and disconnects.  This causes the conversion of kinetic energy into friction between the parts and produces heat. This friction heat melts the welding surfaces enough to join under a substantial amount of lateral pressure.

As the pieces compress together, the kinetic energy of the flywheel mass continues to spin the component, working the metal interface, removing impurities or voids, and refining the grain surface.

The flywheel slowly comes to a stop, and the welding process is finally complete. Depending on the size and composition of the materials, the IFW process as a whole takes between 15 and 45 seconds.

The lesser peak temperature reduces the intermetallic formation and allows a range of dissimilar materials to join. This opens up new possibilities for engineers who can now create bimetallic structures using friction welding.

Many metals which considered very difficult to join could combine using friction welding. For example, copper and aluminum have traditionally been considered challenging to weld together, but with FW, it is possible to create a strong connection between these two metals.

In the FW process, no fillers, shielding gas, or flux involves. Thus no toxic fumes and spatters produce, making it easy and less chaotic for the welders.

Thanks to its fully automated process, the industries no longer rely on the labor force, which can boost productivity and reduce defects rate and cost of production. Moreover, industries may also cope with the prevailing welder shortage through automation.

FW is a solid-state joining process in which smaller workpieces combine to create a preform. This preform then machines to the desired dimensions, which reduces the material required to make the component. This, in turn, reduces manufacturing costs.

Watch the video to get into more about Inertia welding.

1- What is friction welding used for?

Big industries use friction welding to reduce the cost of manufacturing and increase productivity. It is a solid-state welding process that welds similar as well as dissimilar metals and thermoplastic. It joins dissimilar metals like nickel alloy to steel, copper to aluminum, titanium to copper, etc.

2- What is the principle of friction welding?

Friction welding works on the principle of friction that generates heat by friction between two metals\material. Two surfaces to be welded are brought together and rubbed against each other at high speed. The friction between the rotating and non-rotating surfaces produces enough heat to weld the interface.

Friction welding is a solid-state joining process that uses heat and pressure to combine two parts without melting or heating the base materials. It is an effective method for joining dissimilar materials. The process is widely used in industry, particularly in the automotive and aerospace industries.

Because of its versatility, the friction welding process joins many materials, including plastics, ceramics, steel, and titanium. FW offers an alternative to the more conventional arc welding processes.

Interested to know about a career in welding, read our article Is welding a good career choice?