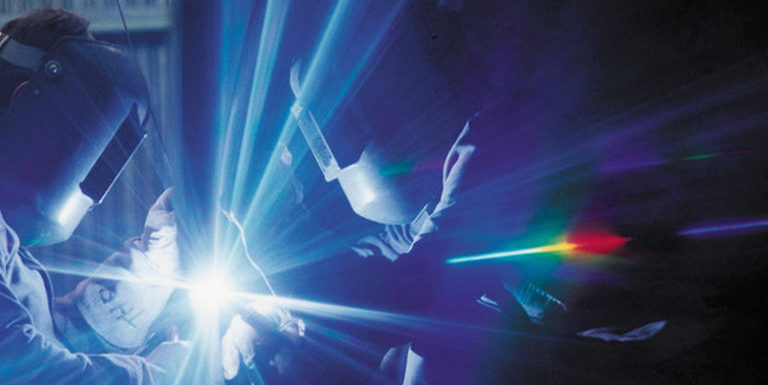 Along with the different equipment you will need for welding, you will also have to interact with different types of welding gases.

Welders use different gases separately and also as a mixture of two or more gases. It depends on the welding technique you are using to join the metal pieces. Because the type of gas you need to use must be suitable for that type of welding.

Not only we will be discussing the types of welding gases in detail, but also their purpose and use in the welding field. 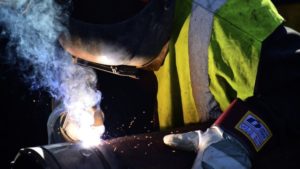 Welding gases are categorized into two main types and all the gases fall under these two categories:

Inert gases are non-reactive gases when they are kept and used in certain conditions. These types of gases do not change themselves or produce any change when they are used with different substances at different temperatures.

With certain conditions, these gases are capable to create changes in them as well as the substances they are used with.

When they are used during welding, the weld can be obtained naturally. There is no unwanted change or distortion in the weld.

Reactive gases are very different from inert gases. They can react under several conditions and can cause changes in the substance they respond with. In some cases, they are also capable of creating change in themselves.

While used during welding, reactive gases can cause changes in the welding state after the weld is completed. These gases can increase the substance’s fusion which can help in getting an effective weld.

Why do we use welding gases?

Welding gases are used because they give benefits in many ways. Some of them are listed below:

Welding gases are used in four different ways during welding. These gases can be used for the following purposes:

As a shielding gas

Bubbles are formed when the metal is exposed to air during welding. It results in bubble formation in the molten metal. 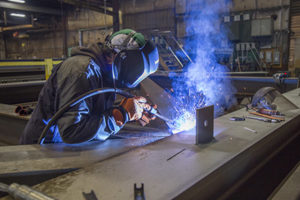 While using TIG or MIG welding technique, shielding gas is must required. It will help in keeping the dust particles and impurities away from the weld.

In case you are using a filler material made of coated flux, then you don’t have to use a shielding gas because both of these serve the same purpose.

Shielding gases come in the category of inert gases. These gases are preferred to use in MIG and TIG welding because they remain stable during the welding process. They affect the weld in different ways depending on which gas you are using.

As a purging gas

Purging gases have the same function as shielding gases. The only difference is that purging gases are helpful when used under the weld. These gases protect the underside of the metal you are welding. It is done separately after welding. 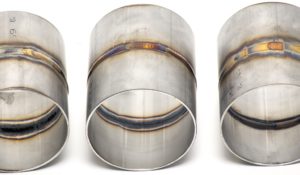 Stainless steel often requires purging gases. The lower part of the joint is sealed and then purging gases are blown all over it. You can use the same gas as shielding gas as well as a purging gas. Or you can use a different gas depending on the type of metal being used.

As a heating gas

There are some welding techniques for example brazing and gas welding, where gas is used as a heating agent to heat rods and metals. Heat is provided by supplying the gas with the help of a gun to increase the reaction. 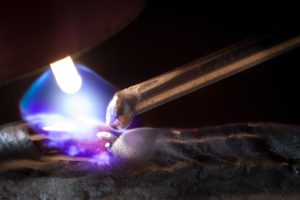 Here, an arc is no longer required because heating gas gives a similar function as an arc does.

There are some welding methods where metal is heated before it is welded. Here we are required heating gases to fulfill the need. It is a mixture of oxygen and air. It is lit by using a flame and then it is used to heat the metal.

As a blanketing gas

Blanketing is usually done to ensure the safety of the weld. It is done to protect the weld from contamination and stains. 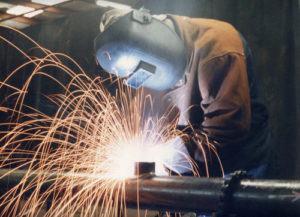 The procedure is to fill the area with the gas around the weld. In this way, the weld is surrounded by gas which serves as a blanket to keep it safe from airborne particles and dust.

It is often done to fill finished products. And sometimes it is filled in a tank filled with air. The gas and air form a mixture and protect the tank from different reactions and other gases.

You will find a range of welding gases on your visit to a welding place. You can choose a certain type of gas that goes best with the material you are working with. It also depends on the welding technique you are using.

Some of the widely used gases for welding are listed and explained below:

As we all know that life on earth depends on oxygen. It also falls in the category of most reactive gases. With no taste, no color, and no smell, this gas has some of the few astonishing properties which make it quite useful in welding.

The welding process can become faster if we use oxygen. Moreover, it is also used along with other shielding gases to create the fluidity of molten metal.

When used with the mixture of acetylene, it creates hot flames which are enough to weld metals such as steel. With the use of oxygen, there is no longer a need to use flux filler rods. 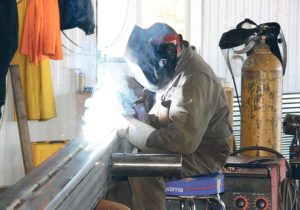 Carbon dioxide is used for shielding purposes. It is a very common gas and is less expensive and hence easily available to use.

One drawback of using carbon dioxide is that it produces spatter during welding. This is the main reason that this gas is not used in its pure form. Instead, it is used in the form of a mixture to ensure an effective process. 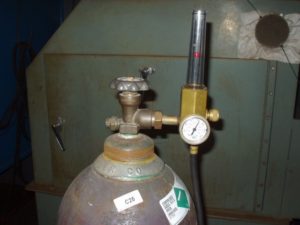 Argon lies in the category of inert gases. It does not give any reaction under normal conditions. But at high temperatures, it is capable of changing its form.

It is often used with metals like aluminum and stainless steel as shielding gas. Argon is unable to work with when it is in its pure form because the resulting arc will not be stable in that case. Rather, we can use it along with the mixture of carbon dioxide to ensure arc stability. 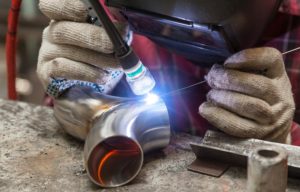 Also, argon is used as a purging gas. For MIG and TIG welding techniques, argon is considered to be the best choice.

Helium is known for one of the most distinctive properties, that it doesn’t freeze. It is also known because when inhaled, it makes you talk in a funny tone.

Helium is not found in abundance that’s why is expensive. It can be used as a shielding gas in its pure form as well as in the form of a mixture. Helium provides deep penetration but arc stability is compromised.

A mixture of argon with helium can give us the best results. This type of mixture is commonly used to weld nickel alloys.

Hydrogen is considered to be a very reactive gas. It is used for shielding purposes in the welding process. Only small blends of hydrogen are required to produce enough heat for the weld.

A process known as “Atomic hydrogen welding” uses hydrogen gas for welding as the name states. Here pure hydrogen is used and by using only a small amount of it, metal becomes molten and is easily welded afterward. 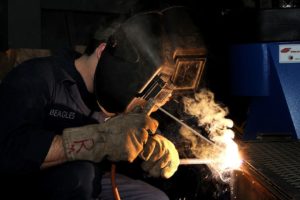 An important thing to be remembered here is that this welding process is known to be a very dangerous process. You will have to go through a special type of training to learn how to do such types of welds.

Nitrogen is widely used as a preservative for not only food but also tanks and motors. It is mainly used to protect those substances which are highly likely to get damaged when exposed to oxygen or other gases.

It is used for shielding purposes in plasma cutting as well as laser welding. Nitrogen should be mixed with other gases so it can be used. Nitrogen doesn’t get along with carbon steel. 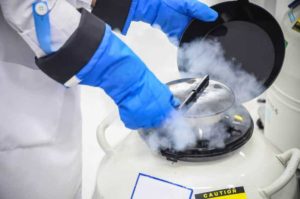 After the weld is completed, nitrogen is also used as a blanketing gas to fill all the spaces. It is found in abundance and is very cheap.

Compressed gas is one of the cheapest welding gas because it is just the normal air that we breathe. When mixed with fuel, it is capable of producing strong flames even at low temperatures.

However, the air is not directly used in welding because it can contaminate the weld. In welding shops, it is used to blow away all the dust and dirt particles to keep the welding area clean.

It is also an inexpensive gas but highly flammable. Acetylene is used along with oxygen for cutting and welding metals. Only its flame is hot enough to cut and weld metals. It is highly recommended as fuel for the welding process. 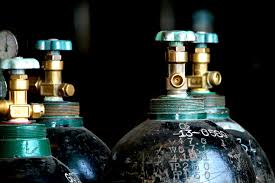 Some gases might be suitable for doing one thing but not suitable for the other. That is why a mixture of gases is used to create a balance between their properties. This way all the lacking properties are covered.

Alone or in the form of a mixture, different gases can be used accordingly to get strong welds. Some of the mixtures of gases used in welding are:

Each type of mixture is used according to the nature of the metal being welded as well as the welding technique. That is why it is advised to choose welding gases carefully to ensure excellent results.

Oxygen acetylene welding is most commonly used. The mixture of acetylene and oxygen produces high flames even at low temperatures. Only the flame is strong enough for cutting and welding metals. It gives high-quality welds and is widely used throughout the field of welding.

Which gas can be used for MIG welding?

Argon is one of the most recommended gas for MIG welding. It is used as a purging gas in MIG and TIG welding as well. Argon is an inert gas. Fluidity in the weld pool and increased penetration can be achieved when argon is used along with helium.

Which shielding gases are best and recommended?

Inert gases are highly recommended to be used as shielding gases. Because they are non-reactive and highly resistant to chemical changes. This makes them best to use for welding purposes. The most commonly used inert gases for welding are helium and argon. These two gases are used in TIG and MIG welding.

All the gases mentioned above can be used according to the welding process. There are many other gases as well which are used in welding such as propane and propylene etc.

Reactive gases should be kept away from welding unless there is a need to use them. Similarly, inert gases can cause suffocation if they are filled in the welding environment. All the protection measures should be followed to avoid all dangers.